Hans Wilsdorf, the co-founder of Rolex, had a motto he lived by: “Produce nothing but beautiful work.” And quality was no less a concern of his than beauty, for on every Rolex watch to this day is inscribed the iconic Rolex durability guarantee: “PERPETUAL.”

What gives the very name “Rolex” such an indescribable mystique today? The answer to that lies in the history behind the more than 100-year-old watch company. Why is Rolex the watch to have for businesspersons, professional divers, sports enthusiasts, Hollywood’s elite, and the affluent in society? Again, you have to take a look at the past to better understand the present.

Rolex: How The Story Began
It was 1905, and Hans Wilsdorf, along with his partner Alfred Davis, founded a fledgling little watch company in London, England. Little did the world know it would produce watches that today go by the time-honored name of Rolex. Little did the two entrepreneurs know that someday a Rolex would sell as the most expensive watch ever auctioned (in 2017 to Paul Newman for $7.8 million!)

In 1919, business got tough in London due to heavy post-World War I tax rates. So Wilsdorf and Rolex moved to Switzerland, where they have stayed ever since. The name Rolex was chosen for a variety of reasons. First, it is thought to be a contraction of “hoROLogical EXcellence.” It was also chosen because it was easy to pronounce in most languages, was symmetrical looking in spelling in all caps, was short enough to fit on a watch face, and because Wildorf fancied it sounded like the winding up of a watch.

In 1944, the Hans Wilsdorf Foundation was founded, which today owns and runs Rolex, and diverts a portion of the company’s income to charitable causes. Wildorf passed away in 1960, but his watches live on as some of the most recognizable status symbols on the planet. Now with the ability to shop for and buy Rolex watches online (with companies now offering fast and free shipping and zero sales taxes), his watches are more widely available, and more popular, than ever before. 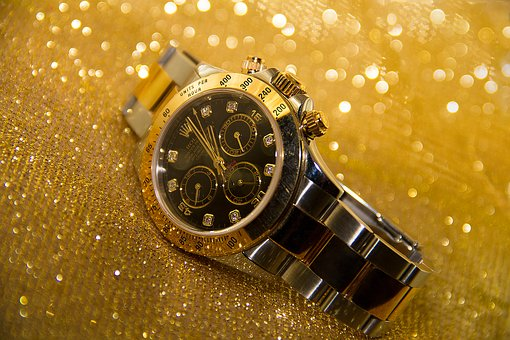 Major Rolex Innovations
Rolex has been on the cutting edge of watchmaking since it began, and the list of Rolex milestones for the industry is long indeed. Rolex came out with the first waterproof wristwatch, the “Oyster,” in 1926; the first automatic date-changing watch (Datejust) in 1945, the very first watch to display times for two time zones on one face in 1954, and the first automatic day of the week changing watch in 1956.

And their innovations in style and quality of materials and build are legendary, if harder to precisely define.

But let’s look at some of their innovations in a little more detail. In 1931, the world saw the unveiling of the first-ever self-winding wristwatch, by Rolex. It was a large, bulky design by today’s standards (dubbed the Bubbleback) but was revolutionary for its time. It utilized a smart internal mechanism and the very movements of the watch wearer’s arm to keep the watch consistently accurate.

Later, in the 60’s and 70’s, Rolex led the way in developing practical quartz movement watches. It collaborated with over a dozen other watch companies and made this dream a reality after 5 years of intense research and development. The Rolex Oysterquartz is the final fruit of this major turn in watchmaking history.

To ensure that watch cases, and not just the watches themselves, were fully waterproof, Rolex went the extra mile. They created watches and cases that were good up to 330 feet below the surface. Then, Wildorf tested them by sending them to the ocean floor in the Mariana Trench in a submarine expedition. The watch was unharmed and had kept perfect time all the while.

In 2005, Rolex also developed ceramic bezels to replace the aluminum bezels in its watches (optionally). Ceramic has better scratch resistance and does not wear as quickly as aluminum. This has become a prime choice for many of Rolex’s “extreme” line of watches used for activities like deep sea diving, mountain climbing, exploring the Arctic, spelunking, flying high in the atmosphere, or even going to outer space. 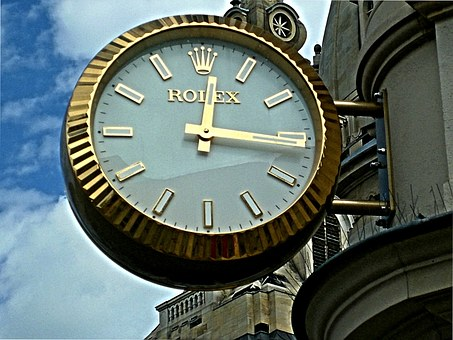 Why Buy A Rolex?
Yes, that magical feel of a Rolex on your wrist, or even just the feel of the word “Rolex” rolling off your tongue has a lot of history, innovation, and unparalleled workmanship standing behind them.

Top of the line Rolexes are a major investment, and many people work for years climbing the corporate ladder, dreaming of the day they can finally afford a Rolex. It becomes a symbol of their achievements and way of life as much as a time-telling tool of exquisite beauty and quality.

There are probably as many reasons for owning a Rolex as there are people who wear one. But one motivation they all share: they know they are getting the absolute best and that the quality of their purchase is sure to last and that Rolex is never going to go out of style.

Read up on more Watch news at:
https://www.jewellerymonthly.com/category/watches-wristwear/