Love them or hate them, most jewellers will agree, Pandora has been the biggest thing to hit the jewellery industry in modern times.

Pandora’s mission, to be the most recognized jewellery brand in the world, appears to be on track, and their strap-line “affordable luxury” has certainly reached out to the UK’s every-day shoppers.

Pandora’s quality and attention to detail has customers eyeing up their next purchase before they have even completed the first, and the brand managed to expose the ‘hidden kleptomaniac’ in all of us.

But has Pandora reached its peak? Pandora would say not. With sales up around 30% particularly on new lines, Pandora report they are still going strong, but is there a new kid on the block?

Buzzing around behind the scenes steps forward Nomination. With no big advertising campaigns, and no big budget marketing, Nomination bracelets have quietly started to rise in popularity. Particularly in the north of the UK. The original path beaten by Pandora in the early days.

I have two retail jewellery stores in the East Midlands, and we have seen a huge rise in the sales of Nomination bracelets and links. Sales in our stores are up around 50% on the last year, and have been quietly rising for the last two or three years. Ken Brown regional sales manager from Nomination confirms their sales are up 30% in the UK, this year, with a similar rise the year before and sales are continuing to rise. Manufactured in Florence, these affordable link bracelets were first created by Paolo Gensini. Paolo, a creative thinker and an entrepreneur, amazingly sold his first Nomination link bracelets alongside Italian ice-cream! The bracelets are made of steel, combined with gold, silver and other precious stones. This unusual combination, is something traditional jewellers are not always keen to embrace. Something Paolo himself acknowledges was a stumbling block in the 1980s when he looked for his first Nomination stockists.

As a jewellery retailer, I’m looking for quality no matter how the product is constructed. Im also looking for items I think I can sell, so I didn’t hesitate to take on a brand like Nomination. It has good branding, nice packaging and the product is a good price point as well as being another piece of collectable jewellery customers seem to really like.

This attitude by jewellery retailers, towards embracing innovative jewellery products no matter what their materials, is something that has evolved since the rise of Pandora in the mid 2000s. I like to call it the ‘Pandora effect’.

All over the UK, small shops became big shops, and in turn evolved from retailing gifts and home-wares into jewellery retailers., with little experience in fine diamonds and gold.

Pandora invested time and money, and trained up and polished up those initial general retailers and shaped them into sound jewellery traders. These traders have no pre-conceptions about metal types or precious stones, so were happy to embrace brands who used unconventional metals.

Some of these new traders have now become big players in the jeweller world. And some like our stores have now left Pandora world but have evolved to take their place in the new jewellery retail world, alongside traditional jewellers. (and the new big cheeses) So now, thanks to Pandora, I think the world of jewellery retailing has changed. It is no longer the domain of retailers whom only sell diamonds and gold.

There are now many jewellery retailers that are simply just that, jewellery retailers. They do not have a ‘bench’, and have not evolved through the traditional fine jewellery route. And ten years ago they may have been selling fish or potatoes. (More probably homewares or gifts) But They are redefining the landscape in modern jewellery stores. Traditional jewellers may scorn at this concept. But many of these new retailers are behind some of the biggest and most profitable jewellery stores in the UK. The new breed of jewellers born out of the ‘Pandora effect’ are savvy business men and women with a keen sense of what is happening in the industry. They network, they join in, they attend trade fairs, conferences and amazingly they talk to each other. Something that just did not happen before the rise of Pandora.

So brands like Nomination with their innovative steel construction are now embraced, alongside other base metal brands like, Swarovski, Vivienne Westwood, and Pilgrim, something my traditional jewellery colleagues would never have previously contemplated.

In my stores we analyse our sales and produce a weekly top sellers list, (it’s a bit like the top 40 on a Sunday night on radio one in the old days.!)

We look at what we have sold the previous week and list the top 5, we call them ‘rising stars’ we then look at the bottom 5, we call them ‘dead dogs’ and anything in between is labelled a steady ‘cash cow’.

Top of our top rising stars list week after week is Nomination. I’m not sure of any brand could now ever really emulate the success of Pandora, but keep your eyes peeled- the Nomination brand definitely one to watch! 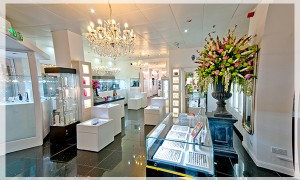 ‘In The Pink’ Jewellers