The Ruby. A beautiful gemstone that is captivating with its wide hue of red colours ranging from pinkish red to pigeon’s blood. Over the centuries it was the stone for nobility and royalty. In modern times, it makes a stunning piece of jewellery for every occasion due to its hardness and durability. But buyer beware. Original mine deposits are wearing thin and are replaced with synthetics. This is the first in a two-part series on the Corundum range: the second article will be on the Sapphire gemstone.

The most famous deposits of Ruby have been from Myanmar, Thailand, Sri Lanka, Tanzania, and Madagascar. They have also been mined in India, Australia, Brazil, Cambodia and Kenya along with some other countries.

However, the colour of the ruby varies with each individual deposit and hence, one cannot easily determine the source from the colour. Therefore, terms such as ‘Burmese Ruby’, and ‘Siam Ruby’ are totally erroneous and refer more to quality than origin. More on the colour of a ruby later in this article.

The Ruby has been a fiery and captivating gemstone over many centuries. It has been known to be a gemstone for nobility and royalty. In ancient times it was known to be a symbol of wealth and prosperity, and to the wearer, it brought peace, protection and help resolve disputes.

Today, Ruby’s metaphysical properties are no less astounding. This exquisite crystal emanates the pure red ray with a vibrancy unsurpassed in the mineral kingdom. It actively stimulates the Base Chakra, increasing vitality and chi, the life-force energy, throughout the physical body and into the spirit. It promotes a clear mind, increased concentration and motivation, and brings a sense of power to the wearer, a self-confidence and determination that overcomes timidity and propels one toward prosperity and achievement.

The Ruby gemstone in modern jewellery

The ruby gemstone is also known to symbolise passion, love, commitment and closeness. Therefore, it is known to be the gemstone of choice for 15th and 40th wedding anniversaries.

Many people also choose to wear a ruby engagement ring as opposed to a diamond one. This is because a ruby is the 2nd hardest gemstone after a diamond and has a Moh’s hardness of 9 (a diamond has a hardness of 10 on the Moh’s scale). While the hardness makes it ideal for everyday wear, it also makes the stone brittle. So due care should be taken while wearing it. Indeed, I have seen ruby rings which have been passed down through generations – grandmother, mother and daughter. It is very versatile in modern jewellery and is often set along with diamonds in rings, pendants, earrings and bracelets.

Ruby gemstones are often set in yellow gold because the yellow metal will negate the purplish-blue secondary colour and make the gem look even more red than it is. However, I have seen rubies set in rose gold (or pink gold as some choose to call it) and it still looks equally beautiful.

The colour of a ruby

Even though the pre-dominant colour of the gemstone is red, it also has a secondary colour which can be brown, purplish-blue or orange. Unlike a diamond, there is no proper grading scale for the colour (or clarity) of a ruby. Three factors determine the colour of the stone: its hue, saturation and tone. The tone refers to how dark or light the primary red colour is. If it is too dark then it becomes hard to make out the red colour and if it is too light then it borders on being a pink colour. This is where buyer’s need to be careful that the jeweller is not selling them a pink sapphire in the name of a ruby. Large stones of a good red colour are rare. The saturation refers to how intense or deep the red colour is. So, a “strong” or “vivid” saturation makes a beautiful gemstone. And rubies that fluoresce (glow in ultraviolet light), can have even greater saturation.

For centuries, rubies have been found in the Mogok region of Myanmar and since the 1990’s deposits were also found at Mong Hsu. Only about 1% of the deposits are gem quality for jewellery use and the colour of these was popularly referred to as ‘pigeon’s blood’ colour.

Rubies from Thailand have a brown or violet tint to them. And these too have been declining in the size of their deposits.

Rubies from Sri Lanka have been found to have a light red to raspberry red colour.

Significant deposits have also been found in Tanzania and Kenya, East Africa. These are known to have a violet to brown-red secondary colour. Hence, these are a deeper red colour.

But like I mentioned at the start, the colour varies with individual deposits and hence, one cannot accurately predict the source of the gemstone from its colour. So, use the above as a general guide only because other factors such as the nature and type of inclusions within the stone also tell a story of origin.

Unlike a diamond, where the fewer the inclusions, the more valuable the diamond and the fact that there is a formal scale to grade the clarity of a diamond, the ruby is totally opposite. The inclusions in a ruby are often an indicator that it is a genuine stone, so if you see a stone which is clear of inclusions, it is highly likely to be a synthetic.

As the mine’s around the world exhaust their capacity fewer stones and smaller natural rubies are found and these can be quite pricey if they are of good colour and cut. Technological advances have enabled the production of synthetic rubies which mirror the chemical, physical and optical properties of a ruby. But these can be differentiated by the fact that the imitation stones emit shortwave ultraviolet light.

Some synthetic ruby imitations are glass imitations and doublets: often with a garnet crown and glass underneath or the upper is a natural sapphire and synthetic ruby underneath. There are many false names also: Balas Ruby (= spinel), Cape Ruby (= pyrope) and Siberian Ruby (= tourmaline).

Inclusions in a ruby

Given that technology has become so good at imitating the physical, chemical and optical properties of a ruby it has become difficult for jewellers to tell the difference between a genuine treated ruby or a synthetic ruby. This has caused the best of jewellers to sell a synthetic ruby thinking that it is genuine; only for the customer to find out later from a professional valuation laboratory that their stone has only emotional value and is actually a synthetic stone of little monetary value.

For example: Image 1 below shows a natural Mong Hsu ruby (Myanmar) which has been “extensively heat treated with a flux to heal fissures”. “This flux treatment is especially well known from the rubies from Mong Hsu / Myanmar, which are usually strongly fissured by nature and thus need the flux to be attractive and / or survive the heat treatment. 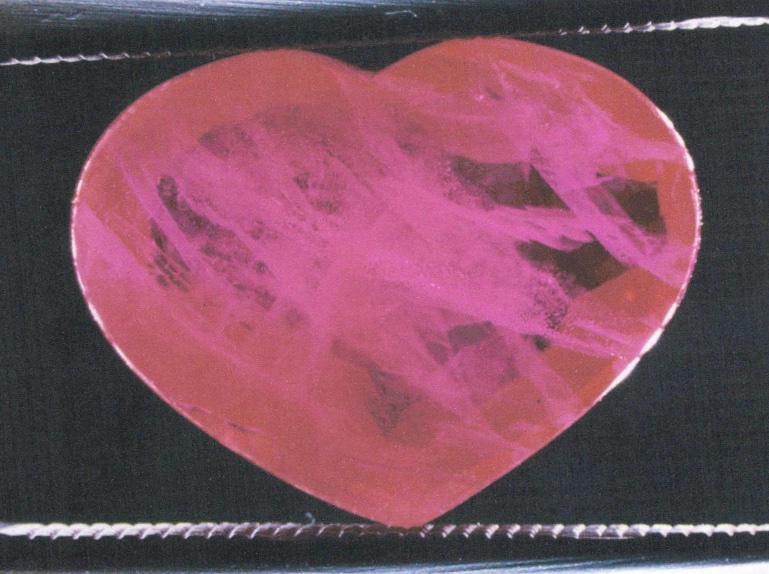 Image 1: A Mong Hsu / Myanmar ruby heat treated under the presence of flux; the many veils present are former fissures that were filled by the flux and the glassy residues. Image courtesy: Dr T. Hainschwang, PhD, DUG, GGTL Laboratories Liechtenstein.

Compare that with the veils/inclusions within this next ruby ring shown in Image 2. The ruby is an oval shape, about 8 carats, mounted with two large trilliant cut diamonds on either side. Images 2 and 3 show these veils. It took deeper analysis in a laboratory to realise that these finger-print like inclusions were uncommon for untreated rubies. 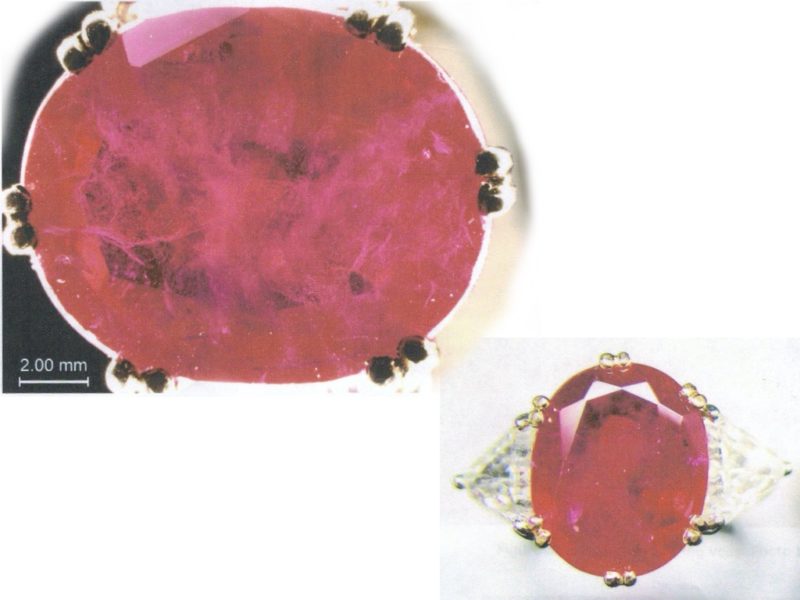 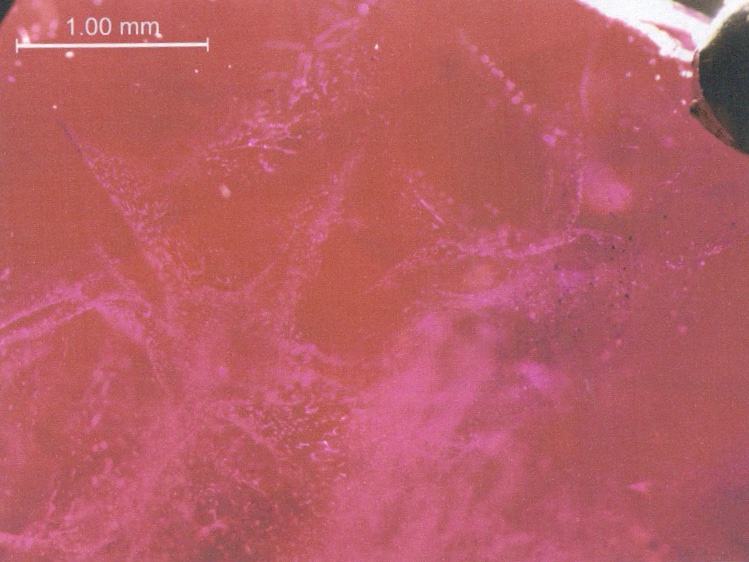 As you will see in Image 4, Further microscopic analysis showed that the inclusions contained hidden two small hexagonal shiny platelets and silver grey particles in one area of the stone. “Such inclusions are very characteristic of synthetic rubies grown by the flux method and represent remnants from the crucible, usually (this case) platinum, or sometimes gold.” 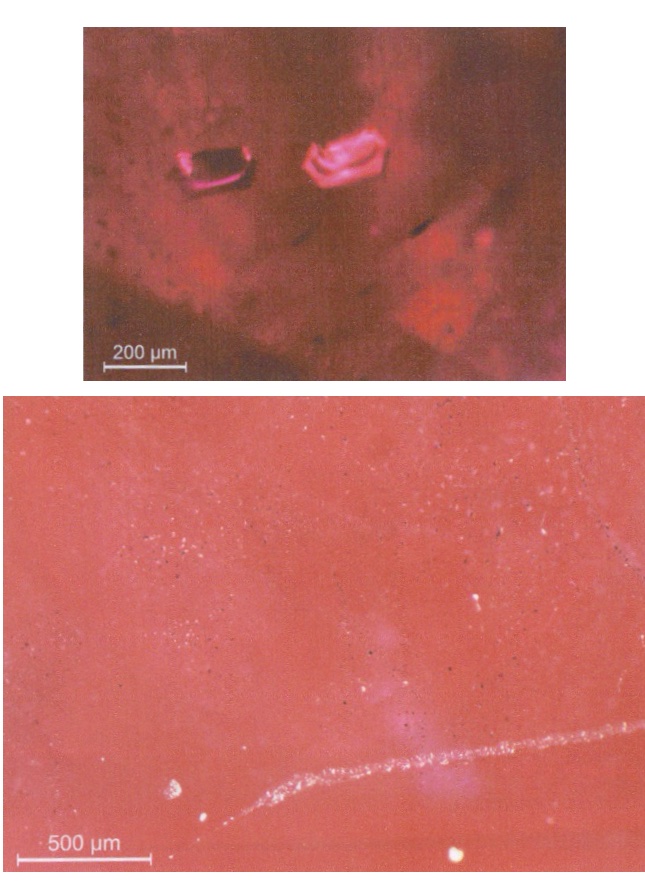 Image 4: Under microscopic analysis it was revealed that the inclusions were biphase (solid/gas) and contained hexagonal platelets (top) and silver grey particles (bottom). This proved the ruby to be a synthetic origin grown by flux method. Image courtesy: Dr T. Hainschwang, PhD, DUG, GGTL Laboratories Liechtenstein.

The owner of this ruby ring was very surprised because they had purchased the ring from a respected German jeweller for a significant sum of money. It is highly likely that the jeweller did not know what he was selling since the identification of the stone was not obvious and needed extensive laboratory testing.

A beautiful natural ruby can be rarer and more expensive than a comparable diamond. The largest cuttable ruby weighed 400ct. It was found in Myanmar and was cut into three parts.

Some famous rubies of exceptional beauty are:

The Edwardes Ruby: 167ct, named after Major General Sir Herbert Benjamin, it was donated by John Ruskin in 1887 to British Museum of Natural History, London.

The Rosser Reeves Star Ruby: 138.7ct, in the Smithsonian Institution in Washington DC. It was found in Sri Lanka and named after Mr Rosser Reeves who donated this stone.

The Peace Ruby: 25ct (43ct uncut), named as such because it was found in 1919 in the Mogok Myanmar mine at the end of World War 1. It has an irregular hexagonal shape with a flat apex. It has a perfect deep red pigeon’s blood colour and was purchased by an Indian trader in Myanmar who then had it cut in Mumbai into exquisite, flawless appearance. It was bought and sold several times over the years but its present location is unknown.

As you have probably figured out, the Ruby is a fascinating, captivating and stunning gemstone. It can be set into beautiful and exquisite pieces of jewellery. However, due care is required when purchasing the gemstone to ensure that you are getting what you are being promised and informed by the jeweller. At the time of purchase, if in any doubt, ensure that you request an independent valuation from a professional gem laboratory even if you have to pay a nominal fee for additional testing. If the stone is genuine and beautiful, it will be worth the money and the certification will certainly help you to obtain a good insurance valuation for it.

For further education articles all about jewellery:
https://www.jewellerymonthly.com/category/jewellery_education/

Previous ArticleAre Luxury Watches A Good Investment?
Next Article Stainless Steel Jewelry is so famous, but why?

Amit Laxman is a GIA Diamonds Graduate and Jewellery Monthly’s own diamond specialist with over 15 years experience in luxury jewellery manufacturing and retail. He is the owner of Radiant Diamonds, loves reading, Bollywood, cricket and Aussie Rules Football, and is a dangerous chocoholic!