Few watches pack as much of a punch as the Rolex Day-Date ‘President’ watch. Love it or hate it, the Day-Date is, quite simply, one the most iconic timepieces the world has ever known.

With Rolex themselves referring to the Day-Date as the ‘Ultimate Prestige Watch’, you can be sure that the makers – and wearers – of this watch mean business. Most readily recognised in yellow gold, the Day-Date is hardly discrete. But that doesn’t mean it’s not subtle upon closer inspection. Moreover, while sometimes interpreted as aggressively conspicuous, the Day-Date can name an impressive selection of personalities amongst its wearers.

So how did it come to be, and what does the Day-Date say about its wearers today?

Released in 1956, the Day-Date was the first wristwatch to display the day and date of the week on its dial in full – making the choice of its name pretty obvious, really. The origins of the Day-Date’s nickname, however, are a little more uncertain. While some say it derives simply from the watch’s ‘President’ bracelet – a bracelet that appears on a number of Rolex models and was first introduced in 1956 – the fact that the watch has been worn by numerous American presidents also factors.

Rolex’s relationship with US presidents began with Dwight D. Eisenhower. Some five years before the Day-Date was created, Rolex gifted the 34th president with a Datejust in yellow gold – the 150,000th chronometer produced by the brand. But it was the Day-Date, not the Datejust, that earned the ‘President’ moniker.

The main reason the Day-Date became known as the President watch was Lyndon Johnson. During his six years in office, Johnson was frequently seen with a yellow gold Day-Date gleaming beneath his cuff. LBJ was also reputed to have gifted a number of Rolex watches to his friends, including an inscribed Day-Date for his cardiologist, J. Willis Hurst.

Yet while Johnson was the first presidential ambassador of the Day-Date, he was not the first US president to have a connection with this notorious timepiece. John F. Kennedy was a Day-Date owner, too. But unlike Johnson, who wore the watch with pride, for Kennedy, the watch had a slightly different meaning.

We’re all familiar with Marilyn Monroe’s famous performance, ‘Happy Birthday, Mr President’, delivered to JFK on his 45th birthday. While JFK joked off the overtly provocative tone of the performance at the event, describing it as ‘sweet’ and ‘wholesome’, he was somewhat more dismissive of the gift she presented to him the same evening. 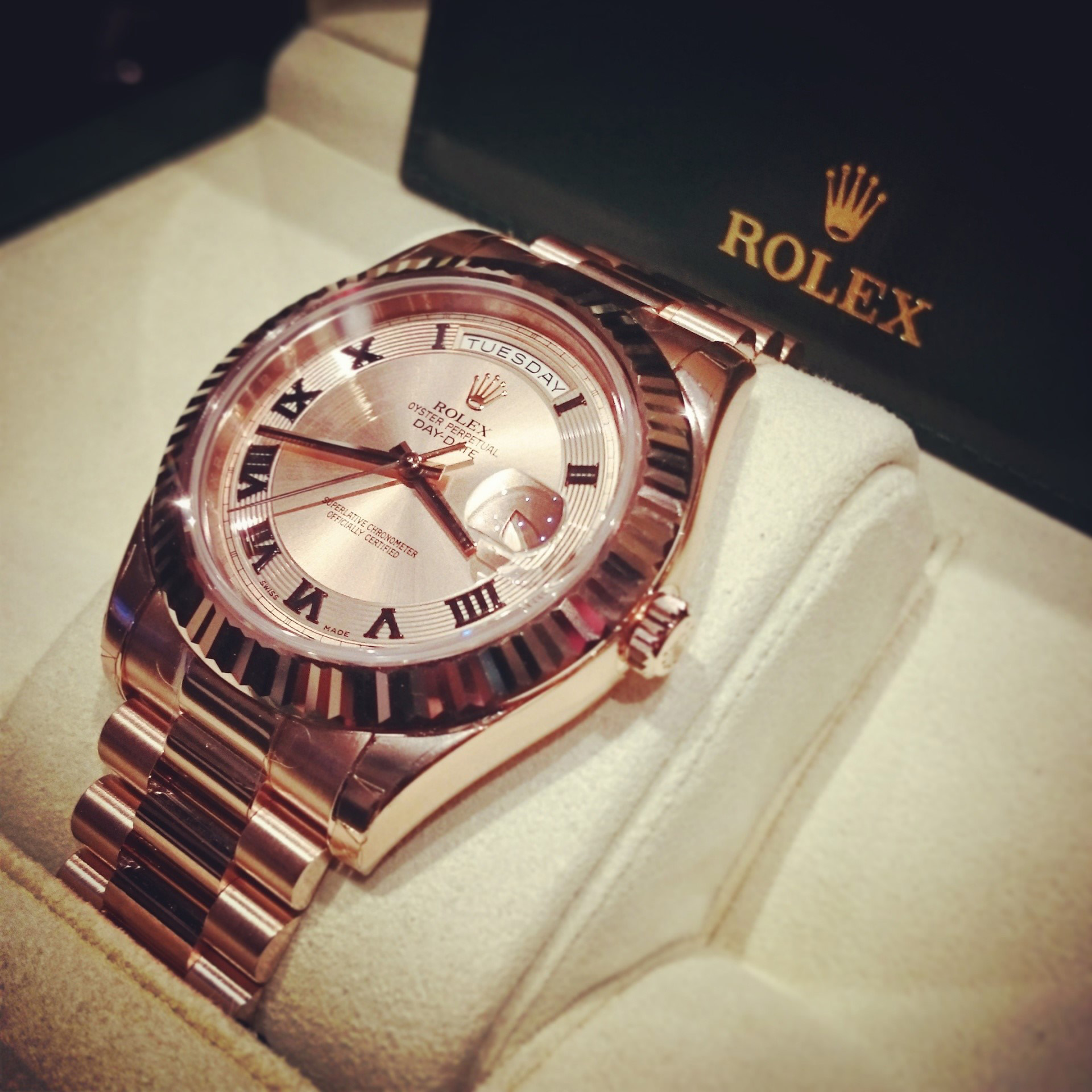 In fact, the 18ct yellow gold Rolex Day-Date Monroe gave to JFK on 19 May 1962, inscribed with the words, ‘Jack, with love as always from, Marilyn’, may have never made it on to his wrist. He allegedly told his aide to ‘get rid of it’. It stayed out of sight until 2005, when it finally emerged at an auction, collecting a relatively modest $120,000.

Aside from US presidents, the Day-Date has been associated with some of the richest people in the world. Warren Buffett, the investor whose net worth exceeds $86 billion is the third wealthiest man in the world. Despite being known for frugality in his personal spending (he still resides in the same Nebraska home he purchased in 1958), there is one luxury the magnate allows himself – a Rolex Day-Date watch. His personal website states that his President watch ‘hasn’t left his side in the last decade’. Now that’s a meaningful endorsement if ever I’ve ever heard one.

There’s the backstory. Now onto the technical nitty-gritty.

The Day-Date comes in two sizes: the classic 36mm, and the even more noticeable 40mm. It is only available in precious metals of white gold, yellow gold, Everrose (Rolex’s own brand of rose gold), and platinum. It looks best with the President bracelet, but you can also get it with a leather strap. I think the champagne dial looks best, but you can get the dial in a whole array of colours and finishes. If you really want to make a statement, you can get your Day-Date set with diamonds.

But is a Rolex Day-Date right for you?

Due to the very fact that everyone knows Rolex – and perhaps for no other reason than that – a Rolex can be seen as a conspicuous extravagance. The classic yellow gold Rolex Day-Date is, in many ways, the epitome of this image. It’s instantly recognisable, instantly impressive, and likely to get a reaction. As Jack Forster put it in Hodinkee, “the conundrum posed by the Day-Dates is ‘exactly who’s wearing who?’”

The Day-Date has become, for many, more of a status symbol than an example of haute horlogerie. But that doesn’t stop it from being a fine watch. With its powerful cast of notable wearers, it’s a watch with a story to tell. The question is – where do you fit in that story?