After reading a renowned watch companies infographic on the most expensive watches in the world, we wanted to look at whether luxury watches are a good investment, or whether the money could be spent elsewhere.

The recent auction of the Rolex Daytona Paul Newman saw the watch fetch an astronomical $17.7 million. For many people, this would seem to indicate that investing in a collectable timepiece is a shrewd investment strategy.

However – the complete picture is slightly more complex. Take the example of the Rolex Daytona Paul Newman. The watch was owned by Paul Newman himself for 15 years. The value of this antique timepiece is largely due to the mythos that surrounds it – as well as its rarity. Put simply there is no other watch that boasts its pedigree.

Investing in watches is more about the prestige and style that the watch provides to the individual – viewed dispassionately there is no rationale reason that the Rolex should have been sold for the price that it was. In fact, only very few timepieces will double (or even triple) in value. The story behind the watch is what makes it so valuable.

The reward of owning a rare timepiece is emotional rather than monetary. However – there are certain brands of watch that can be expected to hold their value as the years pass. many of these are incredible examples of the skills that well-known watchmakers bring to bear when designing and manufacturing luxury brands.

Take for example the Graff Diamonds Hallucination which is valued at around $55 million. It is one of a kind – the sheer opulence of the 110 carats of sparkling diamonds that encrust the watch undoubtedly contribute to its valuation. However, remove those diamonds from the watch and sell them off individually and they will not fetch a total sales price even vaguely approaching the watch of which they are apart. The sheer rarity of the timepiece – and its design are the contributing factors to that value. Graff is also responsible for the Diamonds The Fascination which is valued at around $40 million (31 million pounds). 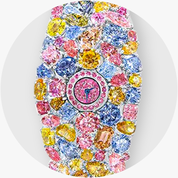 We can once again return to the example of the Rolex Daytona Paul Newman. Aside from the history behind this watch, the value of Rolex watches has remained steady over generations. These fine timepieces are a pretty good investment from that point of view. The buyer of a Rolex can rest assured that their investment will provide a great way in which to safeguard their well-spent money. when they do sell it they will rarely lose part of that initial investment. Another watch that has been steadily appreciating in value is the Omega Speedmaster Professional. This watch has a fantastic story behind it. It is a model that NASA astronauts have used in every manned space mission – including the one that saw man put a foot on the moon for the first time – it is no coincidence that the watch is also known as the ‘moonwatch’. It is rugged and incredibly attractive – but it is the sentiment that drives the price. Although it must be said that the engineering that goes into this watch is incredible.

For those who want to view their purchase of a watch in terms of return on investment a crystal ball might be useful. It is incredibly difficult to gauge just how valuable a watch that is widely available will be in the future. The guiding principle would, therefore, be that a watch purchase should be made with the heart – not the head. Purchase a watch that will be an expression of your individual style and taste. If you want a watch that will retain its value then go for a classic with a proven track record – and enjoy the satisfaction of knowing that you are the owner of a fine timepiece.

That being said, the infographic we reference looks at whether that one-off fee is really worth it, Watch Centre look at alternatives that would total the value of the most expensive watch in the world. Luxury alternatives such as a house in the Grand Cayman, a Eurocopter, 1957 Maseati and so, so much more..

Watch Warehouse: The Next Generation