In an article published in InColor (ICA Magazine) and then republished by Jeweller Magazine, the great artist gem cutter Victor, Tuzlukov concludes: “I dare say that those who are brave enough to pursue quality in faceting and grading will make history”. Indeed, I bet on this way too.

Since the birth of the world, minerals, precious stones and diamonds have been dealt. However, they only become desirable in Occident since the first well known merchant, Jean-Baptiste Tavernier, brought some Golkonda diamonds back from Persia. Diamonds more than famous today, such as “The Regent” (Louvre Museum, Paris) or “The Hope”(Smithsonian Institute, Washington). His main customers were King Louis XIV and European high ranked nobles by extension, better to say a small niche market.

At the turn of the 18th Century, new diamond mines were discovered in Brazil, and again in the 19th Century in South Africa. Then, diamonds became popular among all aristocracy, small noblesse, and even bourgeoisie. Their profusion made prices shut down drastically. It was then the beginning of the industrial era, coming with the birth of middle-classes.

From 20th Century until today, the gemstone industry has come to its climax, offering to consumers everything able to be mined, as ugly as it may be, alongside everything that can be reproduced artificially as well. Saucepan dealers turned themselves to gemstones dealers, con men and fraudsters entered into the business in large numbers, even the Hollywood actor Leonardo DiCaprio made himself a purveyor of synthetic diamonds.

Tired of these abuses, middle-class consumers turned their backs on the gemstone industry as soon as they understood cheap bought cannot equate to quality gem stones, they understood they cannot afford the moon for a handful peanuts. Furthermore, the 2008 economical crisis helped them to run away from these kind of acquisitions because the future was not clear enough, not clear anymore.

The Market has drastically changed since then, small to medium sized dealers not willing to change their commercial habits have been kindly squeezed out of market. Like skilled merchants, brave consumers became more connoisseurs, more demanding about gem quality and rarity, more demanding about sexy color, high clarity, and the finest precision cut. That is indeed the future of this business. A niche market certainly, but the sole and unique. Definitely. Almost the same market as four centuries ago.

Indeed, the history of diamonds and precious stones is ancestral, the major first act being Golkonda diamonds brought back to Europe by Tavernier, as the birth of an international business.

Coloured gemstones followed the same path and, for lack of real gemological knowledge, are for example, all called rubies, insofar as they are red of course. This is particularly the case for spinels and garnets. In fact, the consecration of colored stones is mostly established around the 19th Century, because of the fabulous Burmese rubies and the breathtaking Kashmir sapphires. This is probably the second highlight of this businesses history.

Today, due to gemological science, gemstones have no more secrets for us. We know their crystalline system, their types of inclusions, from which we can even determine their geographical origin. Yet a third historical event is being born, rather than revolutionised: the Art of Cutting!

For centuries, Europeans have remained the uncontested masters of stone-cutting, including in Persia, where some Venetians emigrated even before the opening of the Indian road. In fact, the first significant historical event in the art of gemstone cutting comes around the 15th Century, in the discovery of absolute symmetry, combined with a significant improvements in polishing, emanating from the Belgian Louis de Berquen. At the beginning of the 20th Century, Marcel Tolkowsky brought new
modifications to prism by calculating ideal angles of reflection of light through the stone. This was especially seen in the diamond, and today has also be adapted to spinels and garnets that benefit from the same fantastic and complex cubic crystalline system, which more precisely, explains their sensational shine, even in the raw state.

What really matters to us today is the revolution in the Art of Cutting with the advent of “Precision Cut”. This phenomenon follows and pursues the same perspectives as those of the major art paintings market in general. Indeed, largely dominated by Europeans, the consecration of the American painter Robert Rauschenberg at the Venice Biennale in 1964 sounded the end of European supremacy in cultural matters. Pop Art was born under the impetus of French speaking Italian-American merchant Leo Castelli, associated with the brilliant curator Alan Solomon of the Jewish Museum in New York. Critics were firing from all sides and diatribes were virulent. Half a century later, the Art market has become global, yet it remains largely dominated by artists and collectors of American origin.

To date, it remains very difficult to determine the exact origin of the revolution in the art of gemstone cutting and the contribution of “Precision Cut”, but there is no doubt that the big part of its source is American, including artists and collectors as well. The rest of the world will follow, for sure, even if it takes a bit time, due to knowledge travelling slower than anything else. Collectors and investors are already seated in the train of this innovative market, some jewellery designers too. Famous international jewellery brands will also shortly get on the train, although slower, without any doubt. At this level, there is however no reason to blame them for their slowness because these giants of industry cannot
move any other way than as an elephant, maybe at the sole exception of visionary entrepreneurs like Bernard Arnault, who snap their fingers to give an order and then takes the lead as usual.

For my part, as a modest merchant of pebbles, I first of all have a little interest in the phenomenon, especially because of the main fact that this type of cutting and polishing remains very demanding in raw material, and that it decreases dramatically the final weight of the stone compared to classical cut, often called “native” in America. But mentalities are changing and the modest merchant of pebbles that I am happy to be has nevertheless also become a little collector on the edges, and what better than to collect the cream of the cream !? 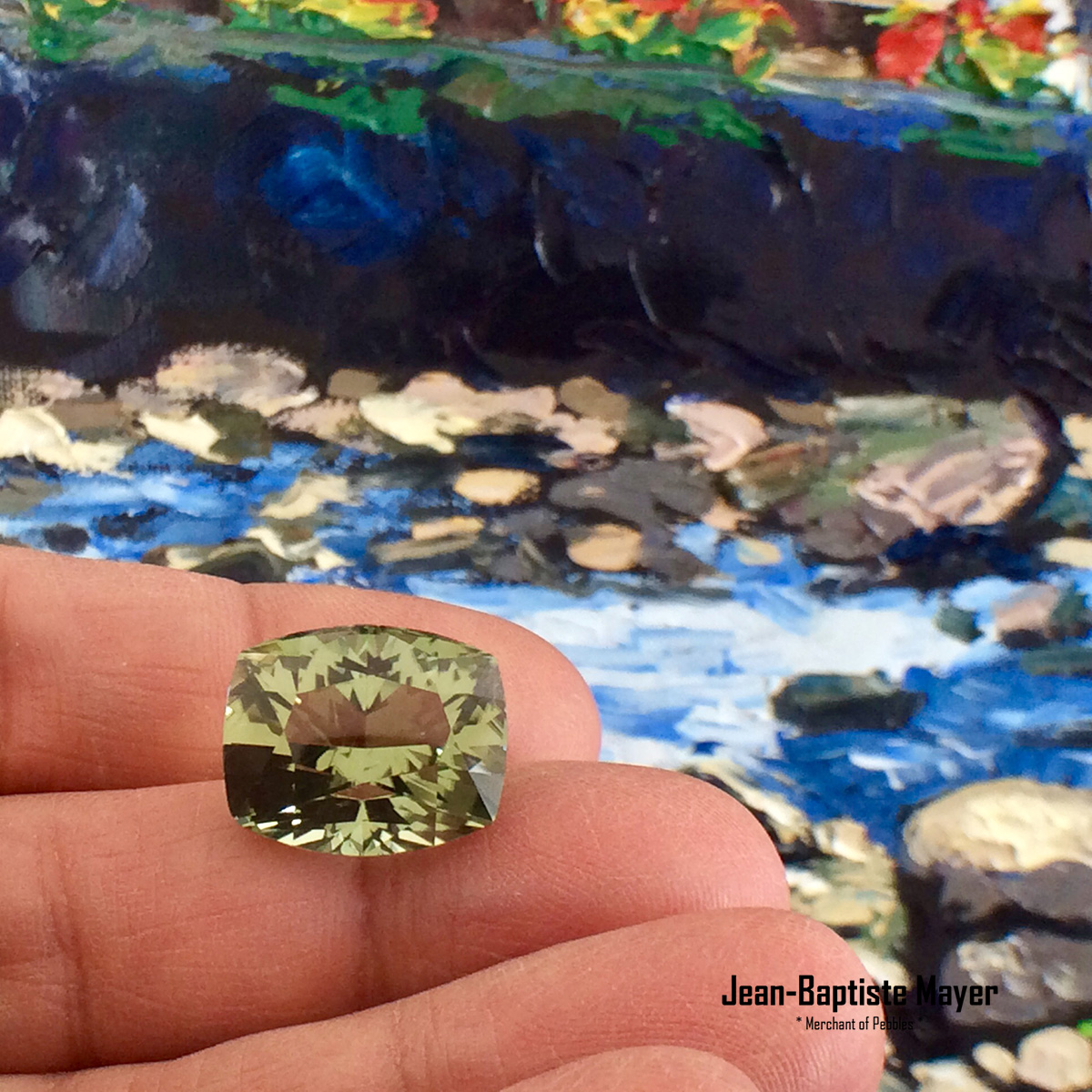 Very talented high-precision gem-cutters are now building their fame as major artists such as Amedéo Modigliani or Claude Monet have done before them through competitions and art fairs. We are no longer talking about the Salon des Indépendants in
Paris or the Venice Biennale, but competitions such as the Spectrum Gold Cutting Edge Award organized by the American Gem Trade Association (AGTA), the Gemmy Competition organized by the Lapidary Journal Jewelry Artist, the Colored Stone
Magazines, and other competitions sponsored by the United States Faceters Guild (USFG).

These high-precision gem-cutters already renowned, such as the undisputed Russian Grand Master Victor Tuzlukov, are the artists of tomorrow, the artists of the gem-cutting of whom it is imperative today to collect stones that they have cut. This is also true of their deceased predecessors John Sinkankas and Stephen Kotlowski, Masters whose cut stones have reached astronomical prices, whatever their nature, although predilection was already going to spinels, garnets and tourmalines.

A new generation is born. It perpetuates and perpetuates even more the magnificence of the colored stones. This generation is American for the most part, with names such as, Jeff White, John Dyers, Derek Katzenbach and many others, sometimes very discreet in their work, wishing to remain anonymous in their workshop.

Many important collectors and investors across the globe understood the phenomenon that will make history in the future. They became the connoisseurs while big reputable high-end jewellery groups continue to claim that precision cut gemstones are not done for them, especially in Europe. But not for a long time anymore. For sure.

Nevertheless, we are actually living in a very active and historical time in the history of gemstones because gem-cutting has become an art, maybe not a major art according to the definition of ancients, but definitively an art, an art highly above the sole craftsmanship.

Personally, as a merchant of pebbles as named by my young son, I’m on the train which has departed at high speed. Here is probably the most important action of my dealer’s life and I feel myself so proud and committed, not only seeing my friend Victor Tuzlukov releasing a collector’s gemstone into the hands of Pope Franciscus in Roma, but also because precision cut gemstones are the sole possible future of the gemstone business. A niche indeed, but also the world of high skilled artisans. Mine.

For further articles all about diamonds and gemstones: https://www.jewellerymonthly.com/category/jewellery-diamonds-and-gemstones/

The Ultimate Guide to Pink Diamonds