A Gemstone is a piece of mineral, which is cut and polished to make it shine and look very desirable. A gemstone is also known as a semi-precious stone, jewel or gem.

Turquoise is an opaque, blue-to-green mineral that is a hydrous phosphate of copper and aluminium. It is rare and valuable in finer grades and has been prized as a gem and ornamental stone for thousands of years owing to its unique hue. In recent times, turquoise, like most other opaque gems, has been devalued by the introduction of treatments, imitations, and synthetics onto the market. 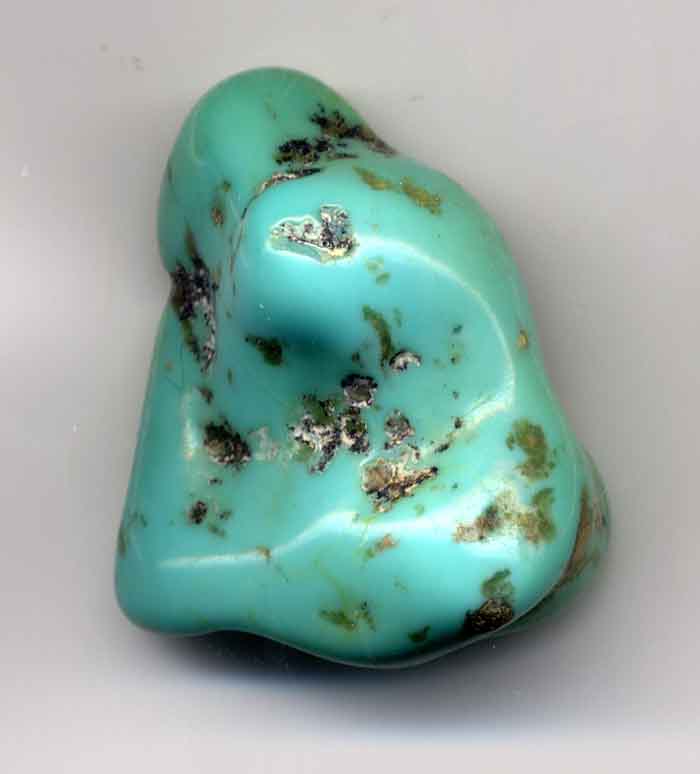 Hematite is a mineral, coloured black to steel or silver-gray, brown to reddish brown, or red. It is mined as the main ore of iron. Varieties include kidney ore, martite (pseudomorphs after magnetite), iron rose and specularite (specular hematite). While the forms of hematite vary, they all have a rust-red streak. Hematite is harder than pure iron, but much more brittle. Maghemite is a hematite- and magnetite-related oxide mineral. 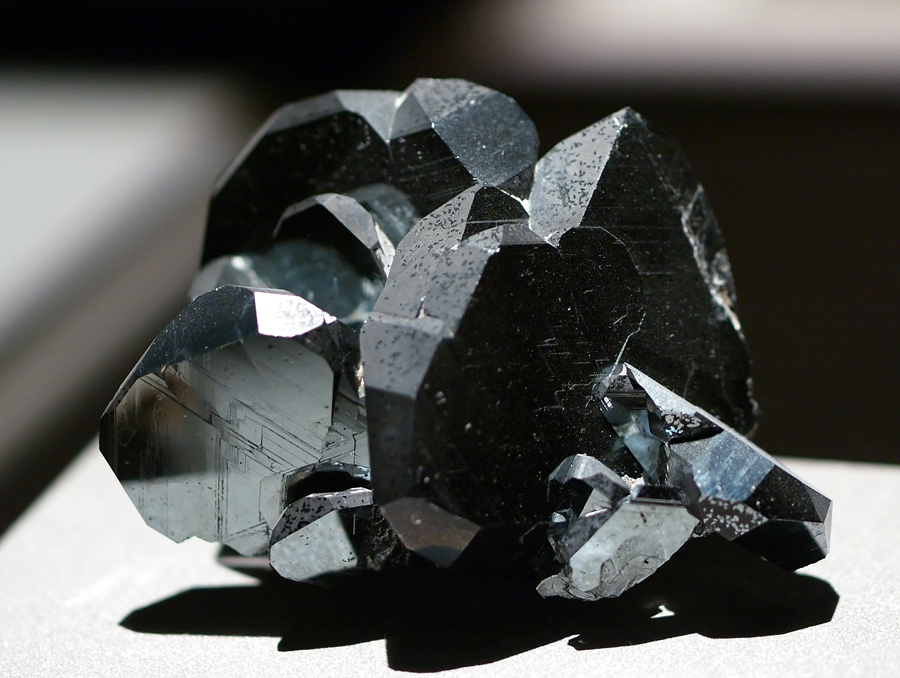 Chrysocolla is a hydrated copper cyclosilicate mineral. The structure of the mineral has been questioned, as spectrographic studies suggest material identified as chrysocolla may be a mixture of the copper hydroxide spertiniite and chalcedony. The name comes from the Greek chrysos, “gold”, and kolla, “glue”, in allusion to the name of the material used to solder gold, and was first used by Theophrastus in 315 BCE. 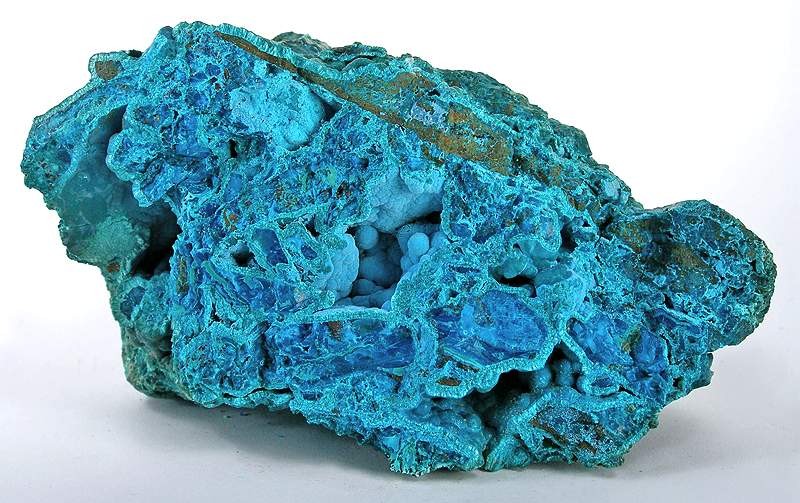 Tiger’s eye (also called Tigers eye or Tiger eye) is a chatoyant gemstone that is usually a metamorphic rock that is a golden to red-brown colour, with a silky luster. A member of the quartz group, it is a classic example of pseudomorphous replacement by silica of fibrous crocidolite (blue asbestos). An incompletely silicified blue variant is called Hawk’s eye. 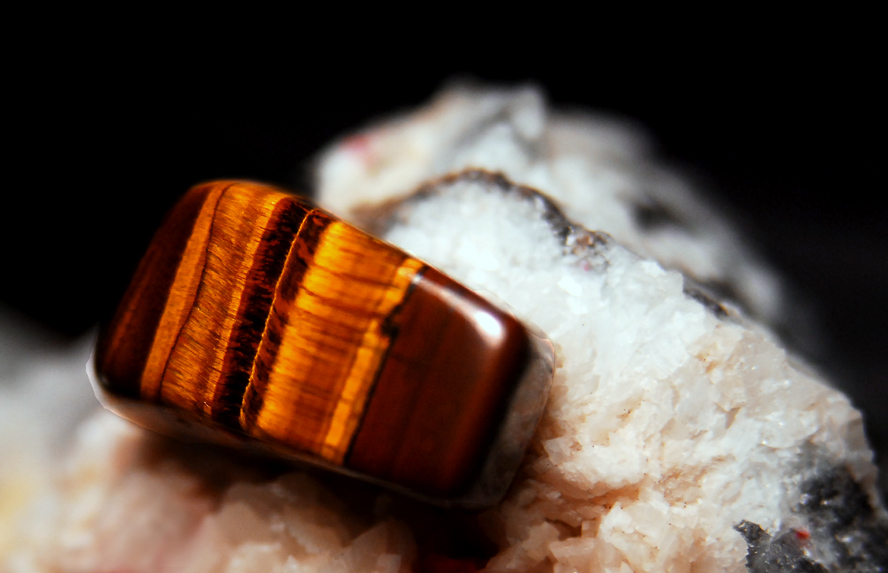 Quartz is the second most abundant mineral in the Earth’s continental crust, after feldspar. It is made up of a continuous framework of SiO4 silicon–oxygen tetrahedra, with each oxygen being shared between two tetrahedra, giving an overall formula SiO2.

There are many different varieties of quartz, several of which are semi-precious gemstones. Especially in Europe and the Middle East, varieties of quartz have been since antiquity the most commonly used minerals in the making of jewellery and hard-stone carvings. 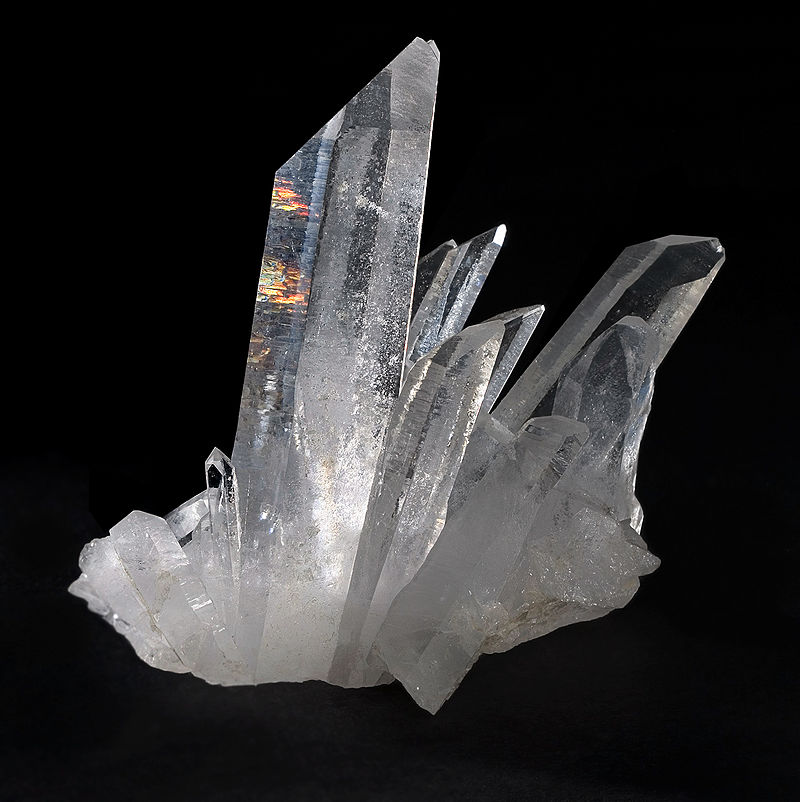 Tourmaline (TUR-mə-leen) is a crystalline boron silicate mineral compounded with elements such as aluminium, iron, magnesium, sodium, lithium, or potassium. Tourmaline is classified as a semi-precious stone and the gemstone comes in a wide variety of colours. The name comes from the Sinhalese word “Turmali” (තුරමලි) or “Thoramalli” (තෝරමල්ලි), which applied to different gemstones found in Sri Lanka. 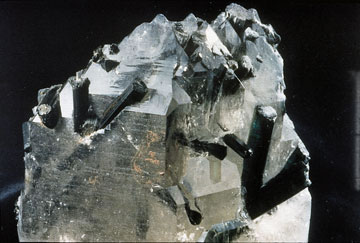 The mineral pyrite, or iron pyrite, also known as fool’s gold, is an iron sulfide. This mineral’s metallic luster and pale brass-yellow hue give it a superficial resemblance to gold, hence the well-known nickname of fool’s gold. The colour has also led to the nicknames brass, brazzle, and Brazil, primarily used to refer to pyrite found in coal.

In ancient Roman times, this name was applied to several types of stone that would create sparks when struck against steel; Pliny the Elder described one of them as being brassy, almost certainly a reference to what we now call pyrite. By Georgius Agricola’s time, the term had become a generic term for all of the sulfide minerals.

Sugilite (also known as lavulite) is a relatively rare pink to purple cyclosilicate mineral. Sugilite crystallizes in the hexagonal system with prismatic crystals. The crystals are rarely found and the form is usually massive. Sugilite was first described in 1944 by the Japanese petrologist Ken-ichi Sugi (1901–1948) for an occurrence on Iwagi Islet, Japan, where it is found in an aegirine syenite intrusive stock. It is found in a similar environment at Mont Saint-Hilaire, Quebec, Canada. In the Wessels mine in Northern Cape Province of South Africa, sugilite is mined from a strata-bound manganese deposit. It is also reported from Liguria and Tuscany, Italy; New South Wales, Australia and Madhya Pradesh, India. 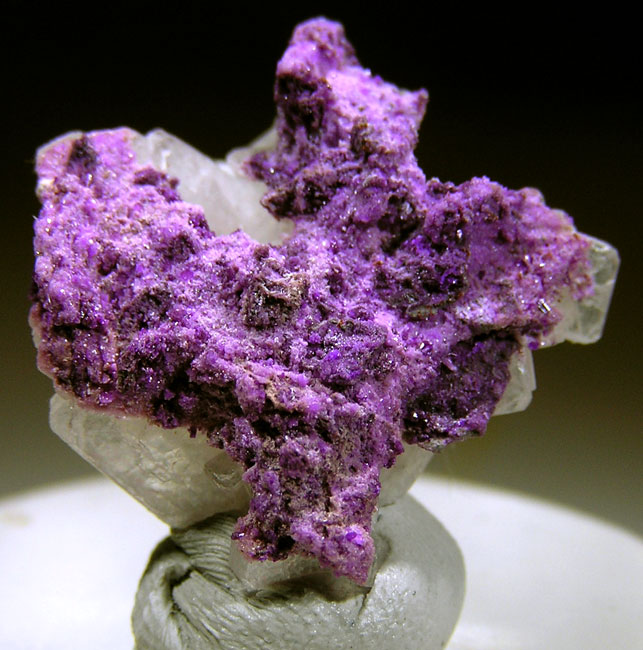 Malachite is a copper carbonate hydroxide mineral. This opaque, green banded mineral crystallizes in the monoclinic crystal system, and most often forms botryoidal, fibrous, or stalagmitic masses, in fractures and spaces, deep underground, where the water table and hydrothermal fluids provide the means for chemical precipitation. Individual crystals are rare but do occur as slender to acicular prisms. Pseudomorphs after more tabular or blocky azurite crystals also occur. 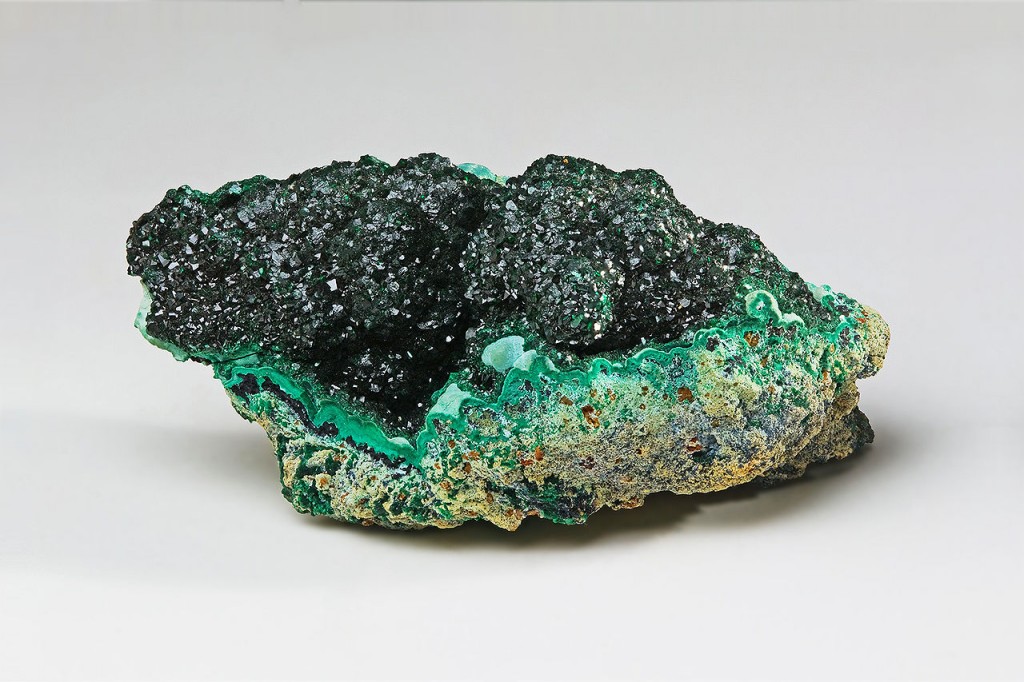 Rose quartz is a type of quartz which exhibits a pale pink to rose red hue. The colour is usually considered as due to trace amounts of titanium, iron, or manganese, in the massive material. Some rose quartz contains microscopic rutile needles which produces an asterism in transmitted light. Recent X-ray diffraction studies suggest that the colour is due to thin microscopic fibers of possibly dumortierite within the massive quartz.

Additionally, there is a rare type of pink quartz (also frequently called crystalline rose quartz) with colour that is thought to be caused by trace amounts of phosphate or aluminium. The color in crystals is apparently photosensitive and subject to fading. The first crystals were found in a pegmatite found near Rumford, Maine, USA, but most crystals on the market come from Minas Gerais, Brazil. 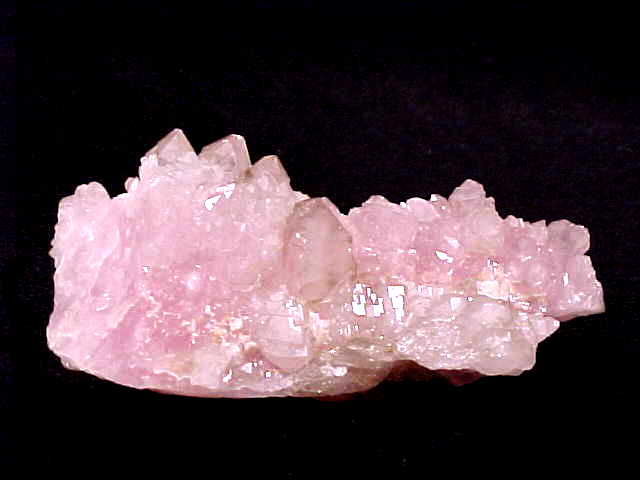 Obsidian is a naturally occurring volcanic glass formed as an extrusive igneous rock.

It is produced when felsic lava extruded from a volcano cools rapidly with minimum crystal growth. Obsidian is commonly found within the margins of rhyolitic lava flows known as obsidian flows, where the chemical composition (high silica content) induces a high viscosity and polymerization degree of the lava. The inhibition of atomic diffusion through this highly viscous and polymerized lava explains the lack of crystal growth. Obsidian is hard and brittle; it therefore fractures with very sharp edges, which were used in the past in cutting and piercing tools, and has been used experimentally as surgical scalpel blades. 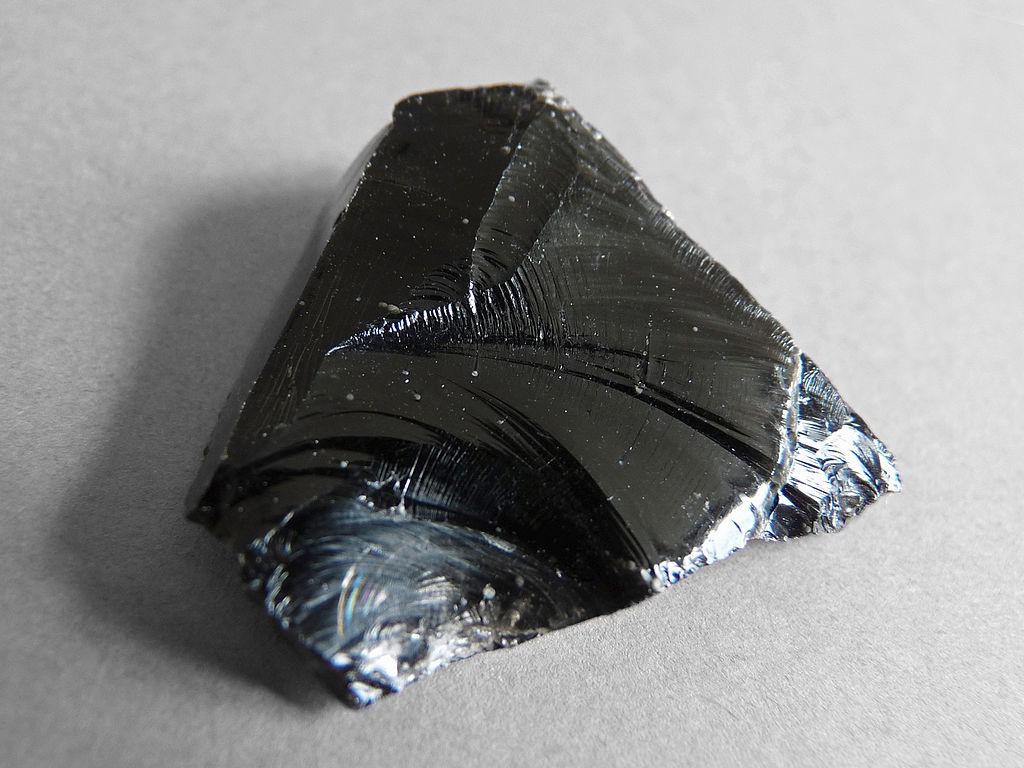 A ruby is a pink to blood-red colored gemstone, a variety of the mineral corundum (aluminium oxide). The red colour is caused mainly by the presence of the element chromium. Its name comes from ruber, Latin for red. Other varieties of gem-quality corundum are called sapphires. Ruby is considered one of the four precious stones, together with sapphire, emerald and diamond.

Prices of rubies are primarily determined by colour. The brightest and most valuable “red” called blood-red, commands a large premium over other rubies of similar quality. After colour follows clarity: similar to diamonds, a clear stone will command a premium, but a ruby without any needle-like rutile inclusions may indicate that the stone has been treated. Cut and carat (weight) are also an important factor in determining the price. Ruby is the traditional birthstone for July and is always lighter red or pink than garnet. 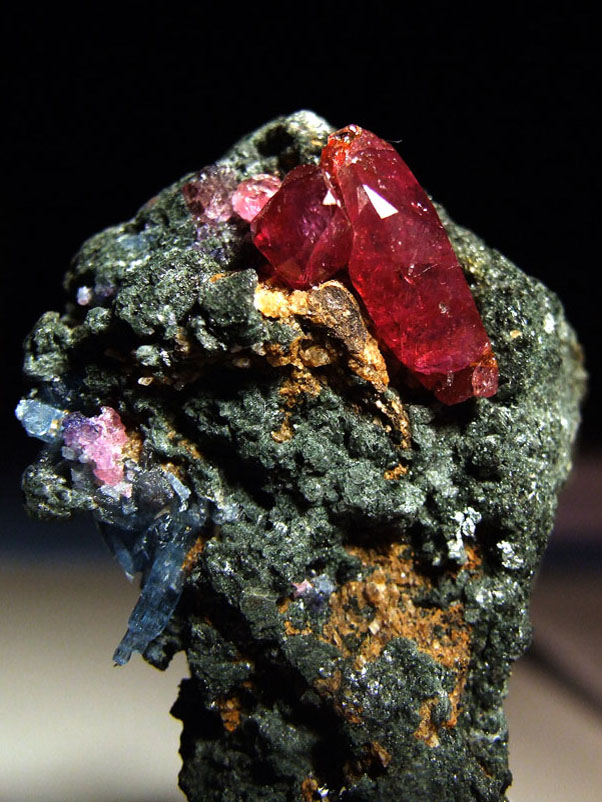 Moss agate (also called mocha stone) is a semi-precious gemstone formed from silicon dioxide. It is a form of chalcedony which includes minerals of a green colour embedded in the stone, forming filaments and other patterns suggestive of moss. The field is a clear or milky-white quartz, and the included minerals are mainly oxides of manganese or iron. It is not a true form of agate, as it lacks agate’s defining feature of concentric banding. Moss agate is of the white variety with green inclusions that resemble moss. It occurs in many locations. The colours are formed due to trace amounts of metal present as an impurity, such as chrome or iron. The metals can make different colours depending on their valence (oxidation state). 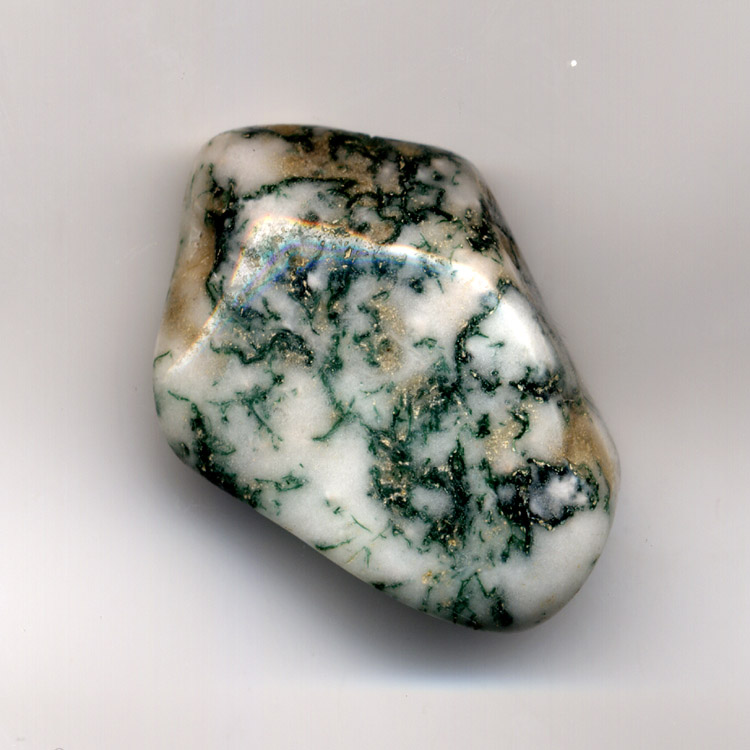 Jasper, an aggregate of microquartz and/or chalcedony and other mineral phases, is an opaque, impure variety of silica, usually red, yellow, brown or green in colour; and rarely blue. The common red colour is due to iron inclusions. The mineral aggregate breaks with a smooth surface and is used for ornamentation or as a gemstone. It can be highly polished and is used for vases, seals, and snuff boxes. Along with Heliotrope (bloodstone), jasper (green with red spots) is one of the traditional birthstones for March. Jaspilite is a banded iron formation rock that often has distinctive bands of jasper. 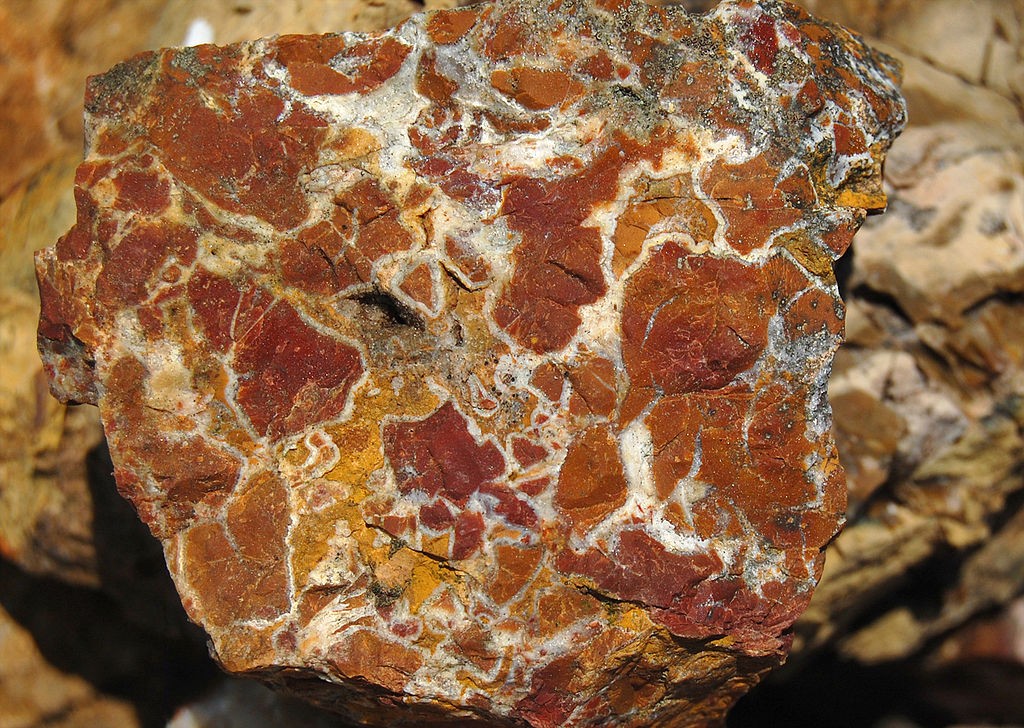 Amethyst is a violet variety of quartz often used in jewellery. The name comes from the Ancient Greek ἀ a- (“not”) and μέθυστος méthystos (“intoxicated”), a reference to the belief that the stone protected its owner from drunkenness. The ancient Greeks wore amethyst and made drinking vessels decorated with it in the belief that it would prevent intoxication. It is one of several forms of quartz. Amethyst is a semiprecious stone and is the traditional birthstone for February. 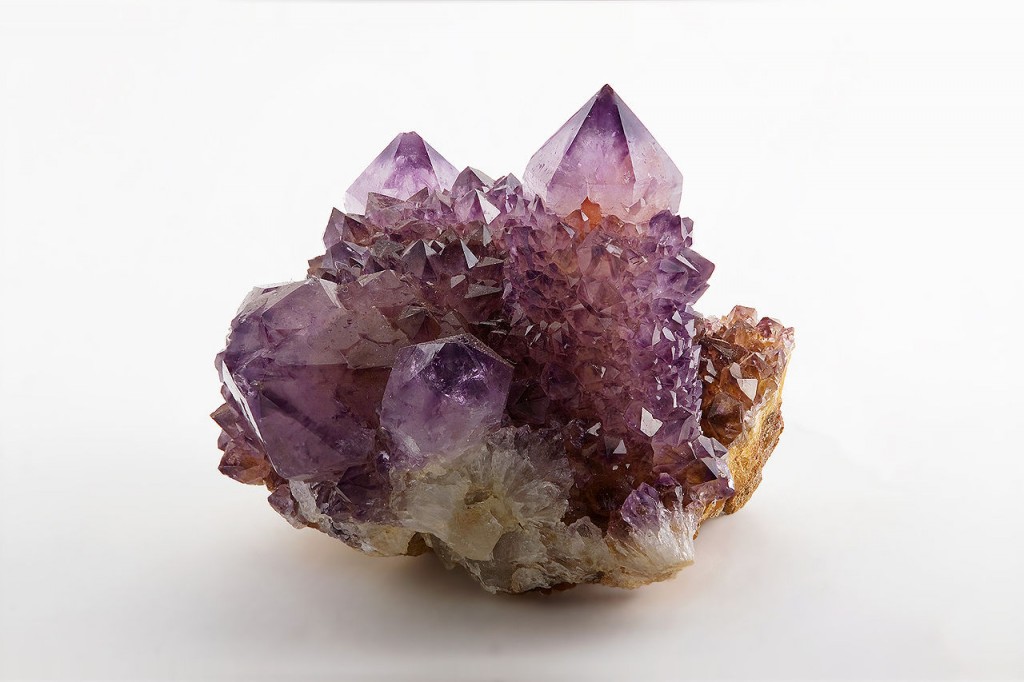 Agate /ˈæɡət/ is a cryptocrystalline variety of silica, chiefly chalcedony, characterised by its fineness of grain and brightness of colour. Although agates may be found in various kinds of rock, they are classically associated with volcanic rocks and can be common in certain metamorphic rocks. The stone was given its name by Theophrastus, a Greek philosopher and naturalist, who discovered the stone along the shore line of the river Achates (Greek: Ἀχάτης) sometime between the 4th and 3rd centuries BC. Colourful agates and other chalcedonies were obtained over 3,000 years ago from the Achates River, now called Dirillo, in Sicily. 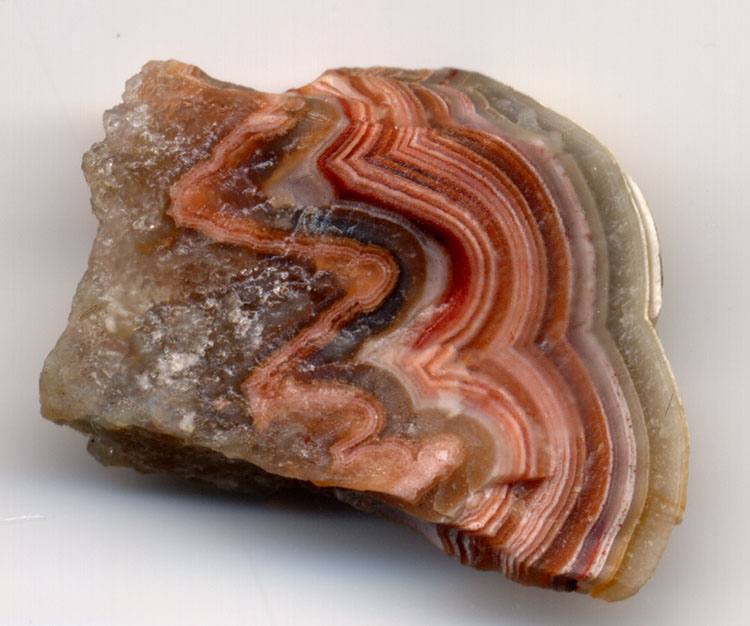 Lapis lazuli /ˈlæpɪs ləˈzuːliː/ or /-ˈlæʒuːlaɪ/, or lapis for short, is a deep blue semi-precious stone that has been prized since antiquity for its intense colour.

Lapis lazuli was being mined in the Sar-i Sang mines and in other mines in the Badakhshan province in northeast Afghanistan as early as the 7th millennium BC, Lapis beads have been found at neolithic burials in Mehrgarh, the Caucasus, and even as far from Afghanistan as Mauritania. It was used for the eyebrows on the funeral mask of King Tutankhamun (1341–1323 BC). 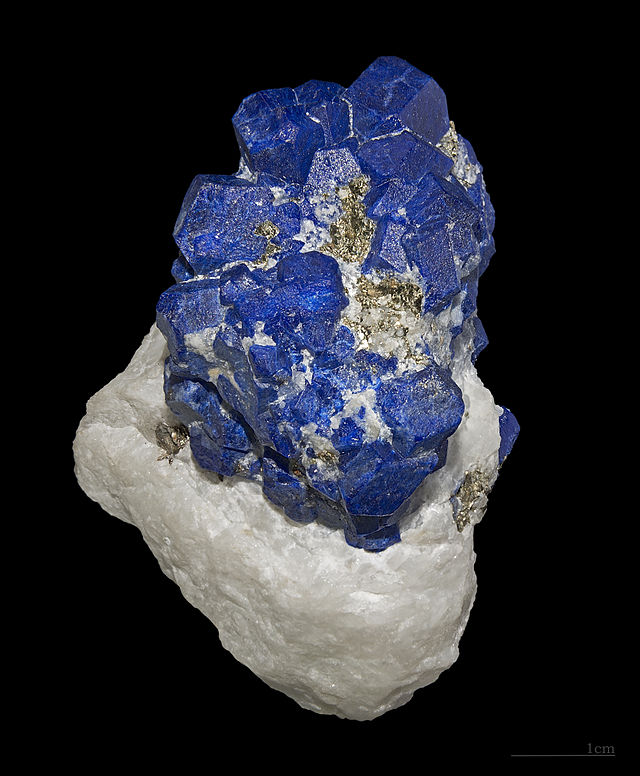 Some of the most desired and precious stones include the Sapphire, Amber, Ruby and Emerald gemstones.

Rare gemstones, include those which occur so infrequently in gem quality that they are scarcely known except to connoisseurs, these include Andalusite, Axinite, Cassiterite, Clinohumite and Red beryl.

Gem prices can fluctuate very often within the jewellery industry. In general per carat prices of larger stones are higher than those of smaller stones, certain sizes of stone can affect prices.